The simplest method of collecting EquityTool data is to sign up to our web app. To use the EquityTool in DHIS2 or another data collection platform, you will need to download the supporting file. Click on your preferred data collection method and complete the form to receive the file via email. Please check your junkmail folder if you do not receive an email from us.

The EquityTool has beed updated based upon new source data. The original version is no longer active but is available upon request.

# of variables in original index: 148

# of survey questions in EquityTool: 8

From there, the standard simplification process was applied to achieve high agreement with the original wealth index. Kappa was greater than 0.75 for the national and urban indices. Details on the standard process can be found in this article.

What does this mean?

When shortening and simplifying the index to make it easier for programs to use to assess equity, it no longer matches the original index with 100% accuracy. At an aggregate level, this error is minimal, and this methodology was deemed acceptable for programmatic use by an expert panel. However, for any given individual, especially those already at a boundary between two quintiles, the quintile the EquityTool assigns them to may differ to their quintile according to the original DHS wealth index.

The graph below illustrates the difference between the EquityTool generated index and the full DHS wealth index. Among all of those people (20% of the population) originally identified as being in the poorest quintile, approximately 16.6% are still identified as being in the poorest quintile when we use the simplified index.  However, approximately 3.9% of people are now classified as being in Quintile 2.  From a practical standpoint, all of these people are relatively poor. Yet, it is worthwhile to understand that the simplified index of 8 questions produces results that are not identical to using all 42 questions in the original survey.

The following table provides the same information on the movement between national quintiles when using the EquityTool versus the original DHS wealth index:

The following graph provides information on the movement between urban quintiles when using the EquityTool versus the original DHS wealth index: 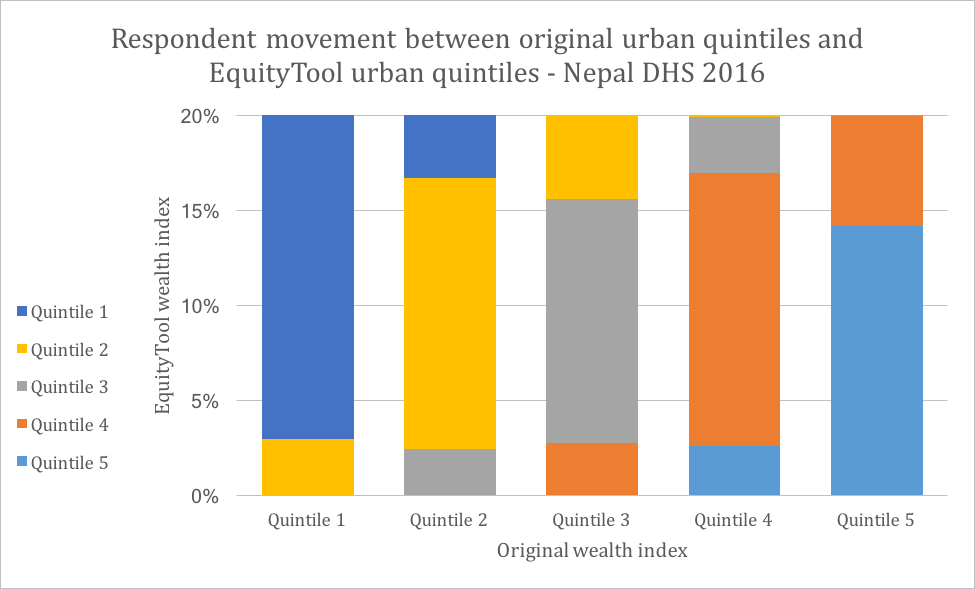 The following table provides the same information on the movement between urban quintiles when using the EquityTool versus the original DHS wealth index:

Changes from the previous EquityTool

We released an EquityTool on December 9, 2015 which compared user data to a benchmark of 2011.  A new source survey, the Nepal DHS 2016 was recently released, and allows us to benchmark results to a more recent population.  This is important, because wealth generally increases over time, and comparing your respondents to an old benchmark population will lead to over-estimating the relatively wealthy in your survey.  The new EquityTool was generated using the same methodology as the previous version, and in generating the new EquityTool, no attempt was made to account for the fact that a previous version existed. In other words, we did not explicitly try to keep the same questions or response options as the previous tool.

For those who have not previously conducted an EquityTool based study in Nepal, the remainder of this section is not particularly relevant.  For those who have used the previous EquityTool, you may be interested to know how the two versions compare.

Practical considerations for users of the previous EquityTool

Comparing the results of surveys that used the previous EquityTool against those that use the current EquityTool is difficult. It will not always be clear whether any difference is because of actual differences in the wealth level of the respondents or because the EquityTool has changed.

Technical comparison between the current and previous EquityTool

The comparison will be assessed in 3 different ways, described below.

This analysis simulates results if the only thing which changes is the benchmark against which respondents are compared. In the 5 years between the two source data studies, more people have acquired assets that are indicative of wealth. In the graph below, the previous EquityTool, derived from the 2011 DHS, is applied to the 2011 DHS data and to the newer 2016 DHS data. In 2011, the proportion of households in each of the 5 quintiles is very close to 20%. The discrepancy seen is due to the use of a shorter questionnaire than used by the DHS survey originally.  However, when applied to the 2016 population, the previous tool distributes households more evenly across the 5 quintiles. This occurs because the 2011 EquityTool contains all of the variables that were deemed important to wealth in the 2016 DHS in the current EquityTool analysis, plus additional questions. In the case of Nepal, although the population may have gotten more wealthy, the assets that are most indicative of wealth haven't much changed. 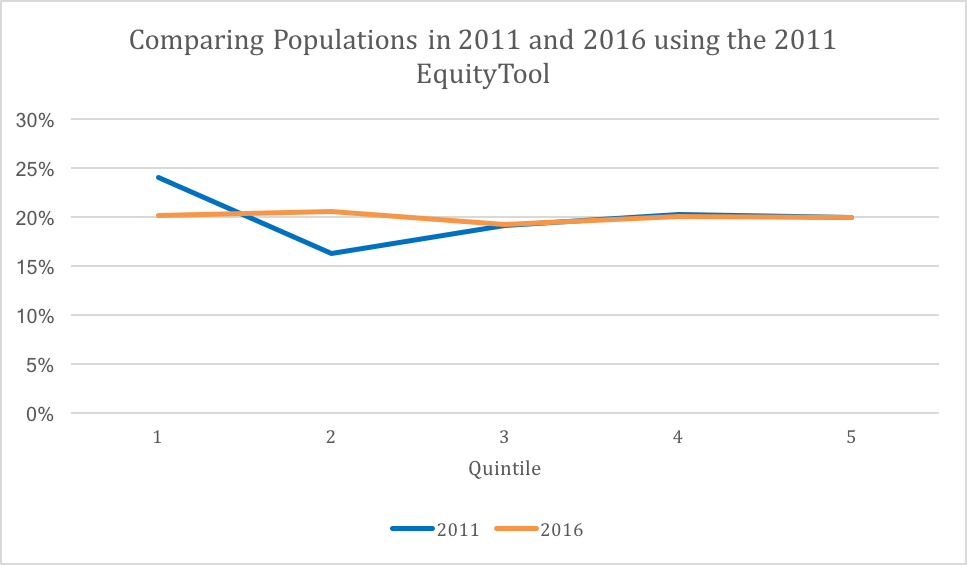 Typically, we do not use the previous questions and weights, because over time, populations become wealthier. Thus, comparing your respondents to this skewed distribution becomes challenging.

As an alternative, one might wish to use the same questions as the previous tool, but update the weighting. This seems reasonable, as the relative contribution of each asset towards overall wealth may have changed over time. Using new weights, but the same variables as the previous tool, we can see how well the resulting quintiles compare to the quintiles based on the full wealth index created by ICF.

In Nepal, where neither wealth nor the variables indicative of wealth have much changed, the previous tool performs well because it is a longer questionnaire, and contains more variables that predict wealth.  The 2011 and 2016 EquityTools give similar results, and even the 2011 EquityTool would likely produce a good assessment of a current respondent pool's wealth distribution.

As illustrated above, although all of the questions in the previous EquityTool are found in the current EquityTool, we found that 10 was more questions than we needed to accurately predict wealth.

The table below shows how the previous and current EquityTool compare, using the same population. This is analogous to a comparison of the two versions of the EquityTool on the population you surveyed using our previous EquityTool.

Metrics for Management provides technical assistance services to those using the EquityTool, or wanting to collect data on the wealth of their program beneficiaries. Please contact support@equitytool.org and we will assist you.

[2] From the Nepal 2016 DHS dataset household recode, available at http://dhsprogram.com